Alok Hsu Kwang-han is a Zen calligraphic painter from China whose work is a confluence of the beauty of Chinese calligraphy, the spontaneity and simplicity of Zen, and the evolution of healing in Western psychotherapy. An artist with a diverse background, Alok has earned academic degrees from American universities in mathematics, theology, sociology, and psychology of religion. He has taught sociology of religion and psychology of transcendence, and in China, translated and published 20 books on meditation.

Alok has exhibited the art that comes through him at the Seattle Art Museum, the Swedish National Museum of Ethnography, the Great Hall of Exhibition in Shanghai, the Water Harp Temple and Garden in Pune, India, the Goldenstein Gallery in Sedona, Arizona, and other venues.

In his workshops, through a process he calls “the creativity of non-doing,” Alok teaches “Zen as art and art as Zen” as well as “creativity and healing.” Since turning 77 in 2015, he has begun to teach immersion tutorial retreats for select individual artists in his home studio in Sedona, Arizona.

Alok Hsu Kwang-han is best known for his Zen calligraphic portraits in transformational sessions for individuals, couples, families, and organizations. He is the subject of the feature documentary Moving From Emptiness: The Life and Art of a Zen Dude, which was partially shot at Omega. 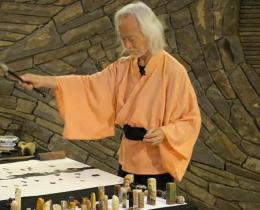 Awakening the Best in the Human Spirit