Among the scores of other community projects she has spearheaded is the Laurel Springs Children's Camp, a performing arts camp. The camp builds self-esteem and cooperation among children of all races and socio-economic backgrounds.

Fonda is a member of the Women & Foreign Policy Advisory Committee of the Council on Foreign Relations; the board of Women's Media Center, which she helped found in 2005; the National Support Committee of the Native American Rights Fund; and sits on the V-Counsel of V-Day. In 1994, she was named Goodwill Ambassador for the United Nations Population Fund.

In 2005, Fonda made a return to entertainment. She appeared in her first film in almost 15 years with Monster-in-Law. More film roles followed, including playing the title character in the 2007 film Georgia Rule with Lindsay Lohan. Working in television, Fonda has appeared in the media-focused dramatic series The Newsroom in a recurring role since 2012.

Fonda is also the author of a 2005 autobiography, My Life So Far. 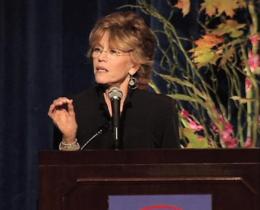 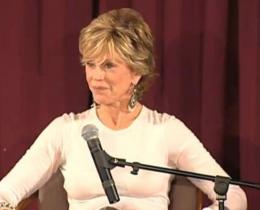