Peabody Award-winning public radio journalist Karen Michel and host of Omega's podcast, "Dropping In," is a freelance cultural correspondent for NPR (National Public Radio) and radio documentarian, whose work is heard on venues around the world. Her pioneering work, "My Dinner With Menopause" still airs, many years after its debut. She is also an internationally exhibited trans-media artist and published poet.

Michel is the recipient of awards, grants, and fellowships from the National Endowment for the Arts, National Federation of Community Broadcasters, The Japan Foundation, The Alaska State Council on the Arts, the Pew Charitable Trusts, and the Fulbright/Indo-U.S. Subcommission, among others.
Also an educator and former trainer for NPR, Michel has taught at the Columbia University Graduate School of Journalism, SUNY-New Paltz, Marist College, and at Duke University's Center for Documentary Studies, where she held the prestigious position of Lehman-Brady Endowed Chair Professor of Documentary and American Studies, the only audio documentarian to do so.
Photo by Ann Seregi 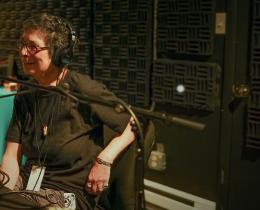