Pat Mitchell is a lifelong advocate for women and girls. At every step of her career, Mitchell has broken new ground for women, leveraging the power of media as a journalist, an Emmy award-winning and Oscar-nominated producer to tell women’s stories and increase the representation of women onscreen and off. Transitioning to an executive role, she became the president of CNN Productions, and the first woman president and CEO of PBS and the Paley Center for Media. Today, her commitment to connect and strengthen a global community of women leaders continues as a conference curator, advisor, and mentor.

In partnership with TED, Mitchell launched TEDWomen in 2010 and is its editorial director, curator, and host. She is also a speaker and curator for the annual Women Working for the World forum in Bogota, Colombia, the Her Village conference in Beijing, and the Women of the World (WOW) festival in London. In 2017, she launched the Transformational Change Leadership Initiative with the Rockefeller Foundation focused on women leaders in government and civil society.

In 2014, the Women’s Media Center honored Mitchell with its first-annual Lifetime Achievement Award, now named in her honor to commend other women whose media careers advance the representation of women. In 2016, she served as a congressional appointment to The American Museum of Women’s History Advisory Council. Mitchell is also active with many nonprofit organizations, serving as the chair of the Sundance Institute Board and as chair emerita of the Women’s Media Center Board. She is a founding member of the VDAY movement and on the boards of the Skoll Foundation and the Woodruff Arts Center. She is also an advisor to Participant Media and a member of the Council on Foreign Relations.

Recognized by Hollywood Reporter as one of the most powerful women in media, Fast Company’s “League of Extraordinary Women” and Huffington Post’s list of “Powerful Women Over 50,” Mitchell also received the Sandra Day O'Connor Award for Leadership. 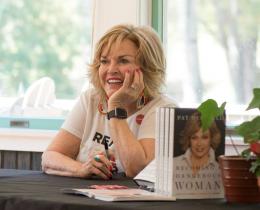 Who Gets to Tell the Story

Who Gets to Tell the Story? 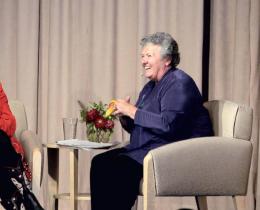