Dave Stringer is a Grammy-nominated producer and composer who has been widely profiled as one of the most innovative artists of the modern yoga movement. He's both an inspiring singer and a captivating public speaker, resolving neuroscience, yoga philosophy, and music into a participatory theatrical experience.

Dave is featured in the upcoming documentary films Mantra: Sounds Into Silence and The Power of Mantra and has toured extensively, leading concerts, workshops, and retreats all over the world. 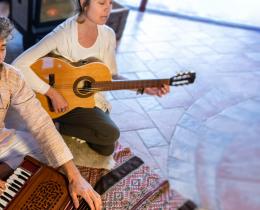 Vanish Into the Song