Lynda Barry is a painter, cartoonist, writer, illustrator, playwright, editor, commentator, and teacher whose work appears, as she says, “all over tarnation.”

In 2019, she was awarded a prestigious MacArthur Foundation fellowship, popularly known as the “genius grant.” According to the John D. and Catherine T. MacArthur Foundation, Barry’s award is for “inspiring creative engagement through original graphic works and a teaching practice centered on the role of image making in communication.”

Barry's career as a cartoonist began as an undergraduate at Washington State’s Evergreen State College, where she shared her comic strips with Evergreen classmate Matt Groening, the future creator of the TV hit show The Simpsons, who secretly slipped them into the school newspaper.

She is best known as the creator of the long running comic strip Ernie Pook’s Comeek that was syndicated across North America in alternative weeklies from 1979-2008.

She has also written three bestselling and acclaimed creative how-to graphic novels, What It Is which won the Eisner Award for Best Reality Based Graphic Novel and R.R. Donnelly Award for highest literary achievement by a Wisconsin author, Picture This, and Syllabus: Notes From an Accidental Professor.

Barry has taught writing workshops annually at Omega since 1998, and has been on the University of Wisconsin faculty since 2013, where she is Associate Professor of Interdisciplinary Creativity in the Department of Art.

What People are Saying About Lynda Barry

“Barry is not just a storyteller, she’s an evangelist who urges people to pick up a pen—or a brush…and look at their own lives with fresh, forgiving eyes.”
—San Francisco Chronicle 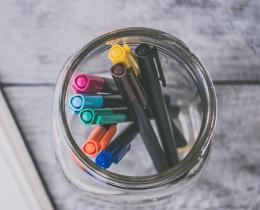 From Scribbles to Scholar

Creativity Is In Your Fingertips