Singing the Lessons of African-American History

From performing with Sweet Honey in the Rock to building vocal communities worldwide, Ysaÿe Barnwell talks about the importance of community singing in the Civil Rights Movement.

Omega: What was it like to grow up in a musical household?

Ysaÿe: My father taught piano, violin, and viola in our home, and I wanted to do what they were doing. I remember at two and a half I had this little, tiny violin, and he started teaching me how to hold it. I was around music all the time and played in the orchestra in junior high school and then high school, and sang in a choir while I was in junior high school. It was a community choir, and all we did was spirituals.

Omega: What’s the first lesson you teach when working with a new group of students?

Ysaÿe: I don't focus on the vocal, because most people will tell you, “I can't sing. I can't match the tune.” I really don't care about that. I want to take their minds off what they think they can or can't do. I want people to just feel free. If you showed up, then you are gonna sing, period. Very often I will do a children's game song and just have people feeling silly. Depending on the amount of time, I launch into a discussion about worldview because I want people to understand the context in which I do music. I want people to understand the evolution of music from Africa into African-American communities, and up to the civil rights movement particularly.

Omega: Why is singing in community so important to you and how does it differ from singing alone?

Ysaÿe: I feel it's important for people to sing and to understand the role that singing has played. Throughout the history of African-Americans, but also in labor movements and women's movements too, song was a part of our culture, and it's not now. I started community singing in a church because there were people who wanted to sing, but to be in the main choir you had to read music. And I said, “No you don't have to read music. Let's just get together and sing.”

It's the way that Sweet Honey operates. We just sing. There's no music that passes between us in terms of our eyes, it's all through the voice and ear, and so I began to understand the importance of oral tradition. Many of the people who are top musicians in our country don't read a note, and yet they are winning Grammys and writing and performing amazing music.

We're talking about the written system and the oral system. One is not better than the other. They are simply two systems. I find that when I go into universities and schools of music, people are listening to me as if this is something they've never heard before. I am, in fact, validating oral traditions. It was not anything that I ever started out to defend, but it has evolved because my understanding of what I was doing evolved.

Omega: In your workshops, you explore African-American history and culture through a wide range of vocal music. What’s your favorite song and what does it mean to you?

Ysaÿe: A lot of times people don't understand the kind of things that you can discover buried in the body of songs that we call our spirituals. It's not just sacred music—there was no separation between sacred and secular in African culture. During the period of slavery, it was all one thing. One of the most important spirituals is probably Balm in Gilead because it says, “There's a balm in Gilead to make the wounded whole. There's a balm in Gilead to heal the sin-sick soul.” Some people learned this song in the Girl Scouts, or have sung it in church, and they never think about what that means.

I ask people, "So who are wounded? Who are the sin-sick?" When you look at who wrote it, you understand that it's the slaves who are wounded and that they have been taught Christianity by people who are enslaving them. Those are the sin-sick. The song says there is something that has the power to heal both sides. That's a very profound song. It's a very profound concept. I think it's probably one of the most profound that I have discovered in terms of lyrics of that period of time.

Omega: How has music helped tell the story of African-American history and culture?

Ysaÿe: It's how we documented our whole existence. You don't have to go any further. From the very first thing that was uttered until today, our whole history as African-Americans is documented that way. We are oral historians.

Omega: Do you think songs can be both spiritual and political?

Ysaÿe: Absolutely. The concept of separating things like that is not a part of an African worldview. There isn't a separation. You can't operate "politically" without having a force behind it. That force is generally going to be a sacred force. All of the music of the civil rights movement came out of the church. People changed the words, but they had that sacred force behind them.

Omega: In your TedX talk, you said that the Civil Rights Movement was the crowning glory of people coming together and singing together. How can a modern movement like Black Lives Matter take a nod from these traditional freedom songs?

Ysaÿe: They don't have songs—they have chants. The culture of millennials is influenced by technology. They tweet each other, “Show up at 9:00 a.m., we're going to do X, Y, and Z." They get together with a 1,000 people they don't know, but they're all there. They don't organize in the same way that we used to organize. We used to come together in a room and agree on what we were going to demonstrate about and practice resisting arrest or practice defending ourselves because we knew the police were going to show up. When people show up today, there's nothing in common that is easily recognizable, except maybe the way they look and maybe the fact that they are there. Millennials don't necessarily understand why singing was important or how it was important.

One of the things that disturbed me about the Selma film directed by Ava DuVernay was that she had no communal singing in that whole film except in a little tiny box at the end with archival footage. Some of the people in the archival footage were still alive, and they were actually in the film that she made. You can see their mouths moving as they're walking across the bridge, but that's not the sound that you hear. You hear a single voice, and that's where we've gone because that voice is commercial. That voice is going to sell the movie, but it interferes with telling the story the way it happened.

People then don't understand the power of all those people singing together as they crossed the Edmund Pettus bridge. Yes, they were scared. But I bet the police at the bottom of that bridge were more scared because they didn't know how many people were coming because their collective voices were so powerful. They had no idea. They didn't have helicopters flying overhead saying, "You got 1,000 people." And so what you heard was a force to be reckoned with, and that has been taken out of the history as she told it. Now young people who see that film don't know that that kind of singing existed. They think people just showed up at the bridge. No.

Omega: What’s an unexpected source of inspiration for you? 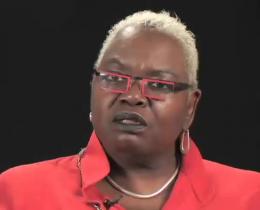 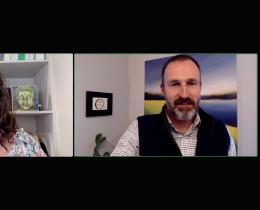