Gayle Kirschenbaum is a filmmaker, TV producer, writer, photographer, coach, and speaker who talks about forgiveness and transforming difficult relationships into healthy ones. Through her work as a documentary filmmaker, she has been called to teach, coach, and speak, including a TED talk.

Kirschenbaum had spent much of her career behind the camera creating and making television programs and films which have premiered on HBO, Discovery, and Netflix. She wrote, directed, and produced documentaries for Arts & Entertainment and Lifetime Television, and produced for NBC, CBS, and FOX.

Kirschenbaum emerged in front of the camera with her first personal film about the power of the human/canine bond, which premiered on HBO called A Dog's Life: A Dogamentary. Following the outpouring of enthusiasm for her short, funny film My Nose, about her mother's quest to convince her to have a nose job, she made the hit feature film Look at Us Now, Mother!! The film won an Emmy and now is popular on Netflix and Amazon. It became the centerpiece of Kirschenbaum's workshop "No More Drama With Mama," which she teaches through keynotes and workshops across the country. 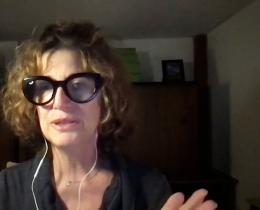 7 Steps to Restore Relationships That Matter